21 May WHAT IS VINYASA YOGA?

When I lived in California, I have to admit that I lost myself between all the different yoga styles. When it was time to choose a class to go to, I could choose between Ashtanga, Vinyasa, Iyengar, Hatha, Anusara, hot yoga and infinite versions of those: vinyasa flow, power vinyasa, hot power vinyasa, bikram yoga, prana yoga, to not talk about aerial yoga, acro yoga and even nude yoga!

In my opinion there is only one yoga and it is the training of the mind to live the present moment with an appropriate body discipline and trough breathing control. All the yoga style consists in this practice, even if they use different ways. The fact that vinyasa yoga is in fashion, it is probably because is a very dynamic style. In this article I look over his origins, the fundamental notions and benefits.

The Vinyasa Krama is an ancient method of physical and spiritual growth. It’s a systematical method of practice, study and teach yoga. The legendary yoga Tiramulai Krishamacharya recovers this method and gives it back his prominence. In 1930 he wrote a small book, called  Yoga Makaranda ( the nectar of yoga) where he explain this method. After him, important Krishamacharya’s students express the quality of Vinyasa in different ways. Between them there are some of the most important teachers of XX century: T.K.V. Desikachar, Indra Devi, B.K.S. Iyengar, Patthabhi Jois and Srivatsa Ramaswami.

From Ramswami we have one of the most complete book about Vinyasa,  The complete book of Vinyasa Yoga. Ramaswami explains how in Vinyasa Yoga each one of the important postures ( asanas) is practicing with a lot and different vinyasa ( variations and movement). Each variations is connected with the follow ones trough a series of specific transition movement, synchronized with the breath. The mind follows slowly, smoothly, with the yogi breath , the Ujjayi , so the union between mind and body is happening trough the action of the breathing like a chains reaction.

The Complete Book of Vinyasa Yoga, by Ramaswami.

This is the style I prefer and teach. Maybe because I was lucky to study with great teachers, and in particular with Anthony Grimm Hall, direct student of Ramaswami and author of an another important book about Vinyasa: Vinyasa Yoga at home practice book«. 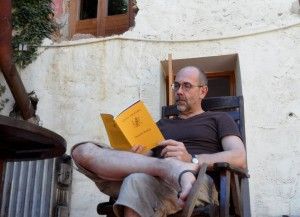 The Vinyasa Krama yoga is based on the postures of Hatha yoga and, instead of keep them for few minutes, it consists of a fluid sequence. In this way it works, not only the body muscles and the internal organs, like the classic yoga, but it gives an intense cardiovascular activity. The most important in Vinyasa is the breathing. During the practice of Vinyasa Yoga the teacher gives instruction for the movement saying at the same time when to inhale and when to exhale. The Sanskrit word Vinyasa was translate as » connexion» and it seems referring to the connexion of body and mind that you obtain trough the breathing. In a vinyasa class is frequently making you sweat and this help to eliminate fat and toxins .

The benefits of yoga in general, and of Vinyasa in particular,are difficult to count. I’m trying to do it in this article:

BENEFITS FOR THE BODY

BENEFITS FOR THE MIND

BENEFITS FOR THE SOUL