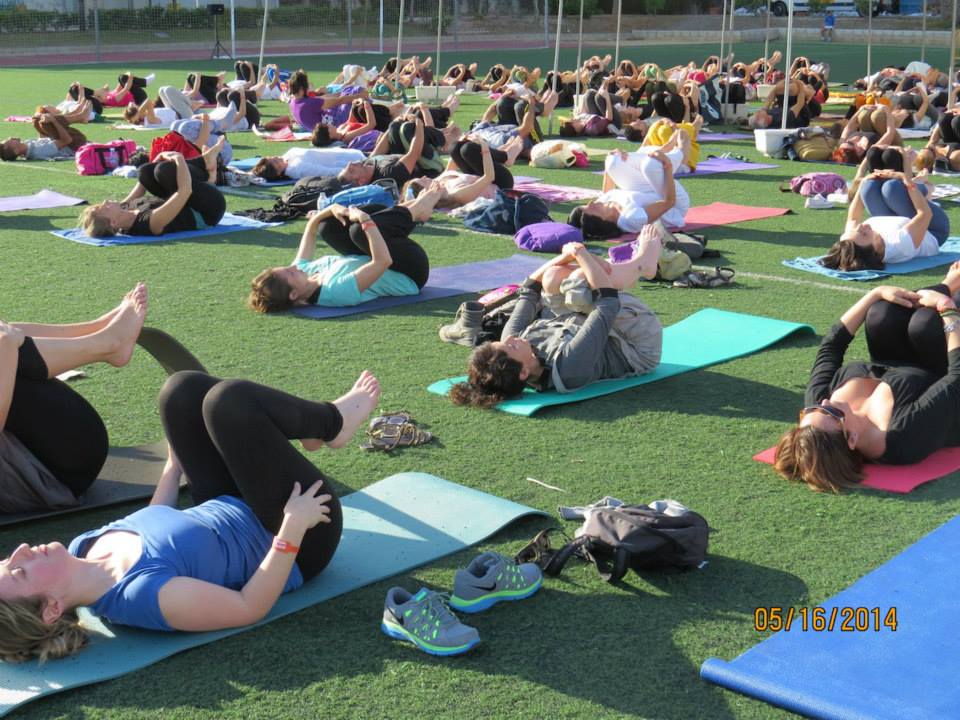 19 May Spring Yoga Festival Valencia: first edition of a festival destined to endure.

Today, Sunday, May 18, the Spring Yoga Festival has closed. This was the first edition of a festival which, judging by the amount of people I’ve seen in all classes, and passion that was transparently in the eyes of all attendees, is designed to last for many years and grow increasingly more. In the Sports Campus of the University of Valencia, over 10 different types of yoga, dances, concerts , art market, vegan food, talks and lectures, workshops, activities for children…have gathered for 3 days. A magnificent act for the spread of yoga in our city, which certainly has required great efforts of its organizers , who I reiterate my thanks from here once again. I ‘m sure it has been a resounding success.

I remember when I first heard it was going to hold a yoga festival in Valencia, because a student (thanks, Noel!) sent me a message with the link of  their website. It gave me incredible joy . While I lived in the U.S. I have seen how many of these festivals are celebrated throughout the country and the wonderful atmosphere that permeates them. Knowing that we were going to finally have one in Valencia, and I was going to be here to enjoy it, made ​​me very happy. What happy, I was elated!

A few weeks later, while in the car on the way to an Ashtanga yoga retreat with Anthony Grim Hall , organized by Living Yoga Valencia, I received a call from Siri Tapa. She asked me if I wanted to teach a vinyasa yoga class at the festival and, of course,  I told her that it would be a privilege and an honor.

On Friday May 16th the Festival began for me with my vinyasa yoga class. When I arrived I heard mantras Sat Atma Kaur,  filling the room with good vibrations (pun intended). I went to the Wood Room and began to prepare the music and class, with the help of my friend Marisa Herraez who assisted me throughout the session setting and helping participants, and Carmen Cantero, who volunteered for the Festival and was facilitating things at all times.

The session was intense and fluid. I began setting the intention of the class that was also the intention of the Festival: celebrating yoga. I proposed to attendants to dedicate the session to reflect on the meaning and benefits of yoga. As you know ‘yoga’ is a Sanskrit word meaning «union». There have been many interpretations of the meaning, but the one I prefer is the one that refers to the union with your true Self first , and later with all that exists, with the Universe, with the Self, awakening from our dream of separation. Yoga provides a map to this journey of inner exploration and encounter with ourselves, a map for the journey back home. And as we travel this way, yoga teaches us strategies to improve our lives. It teaches us to live here and now, to reject all forms of violence against ourselves or against others, to be authentic, to accept our circumstances, to be compassionate, to be grateful… in short, to be happier.

Then we started practicing full yogic breath. Warm and sun salutations. Sequences of standing asanas, sitting asanas, back bends, twists and inverted postures . I post some of these moments: 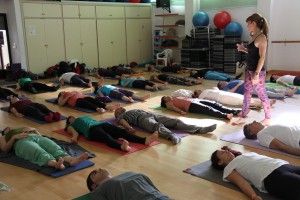 Angels in the Snow: synchronize breath with movement. Lying on the floor, as we inhale arms above our head and stretch. As we exhale, arms back down along the body. 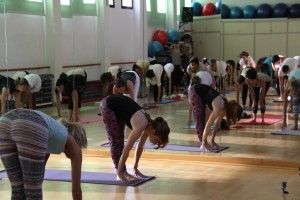 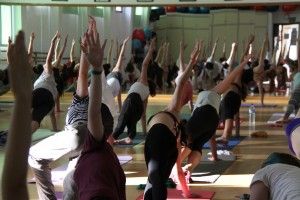 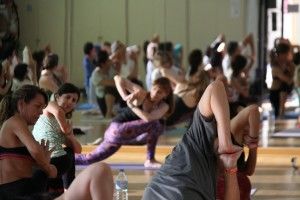 Anjaneyasana (variant with twist and hands in namaskar) 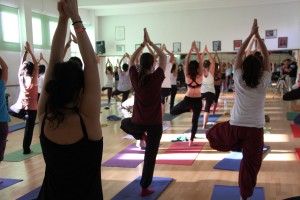 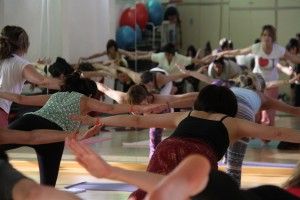 Garudasana to Virabhadrasana III : the eagle spreads its wings. 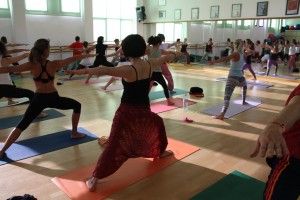 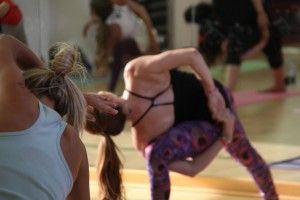 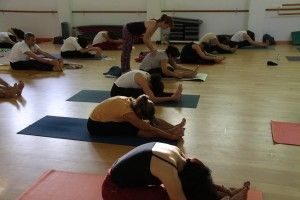 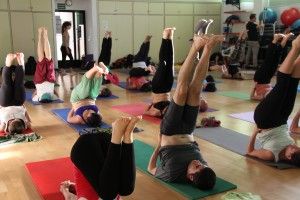 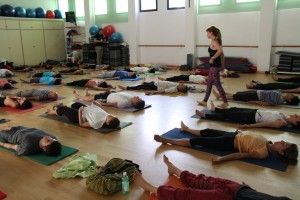 You can also watch this video.

At the same time, outdoors , Ara Vercher and Siri Tapa (Gobinde) were welcoming and inaugurating the Festival . 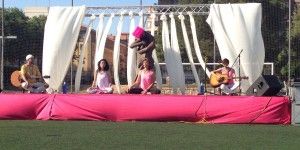 And Marisa Aleixandre gave her lesson on eye´s yoga. 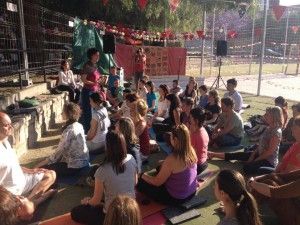 And the Yoga Spring Festival continued with a concert by Joan Sendra presenting his new album » Daa » .

We ended the day having dinner: delicious vegan food (burgers and sausages, although it is amazing) and drinking organic wine. And of course, with the Free Dance vital adjustment with Andrés Quesada (Prem Raja)

On Saturday May 17 , I attended the class of Jivamukti yoga, the yoga of liberation of the soul , taught masterly  by Alexandra Voukitchevitch. I enjoyed the variants of utthita trikonasana extending leg from utthita parsvakonasana and parivritta trikonasana variant, also extending the leg from utthita parsvakonasana, I think this facilitates the deepening of these positions. I also liked Alexandra to remember us that we are not physical beings having a spiritual experience , we are spiritual beings living a physical experience.

With Alexandra Voukitchevitch and Marisa Herráez.

Meanwhile, children spent a great time with Acroyoga, stories, workshop on making mandalas and archery in the Festivalito of Spring Yoga Festival. 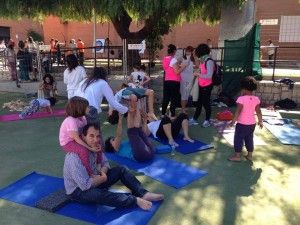 Acroyoga for parents and children in the Festivalito .

Bikram yoga class was full so I was not practicing at 40 degrees this time .

In the afternoon, Integral Yoga with Ananda Tao and Anatomy for Yoga with Joan Sendra .

And today, Sunday 18 traditional hatha yoga class with Bhoomaji. I enjoyed the time spent on pranayama and meditation.

With Bhoomaji after his master class in traditional Hatha Yoga.

Finally , Siri Tapa gave us a great session of kundalini yoga with live music to close the Yoga Spring Festival. 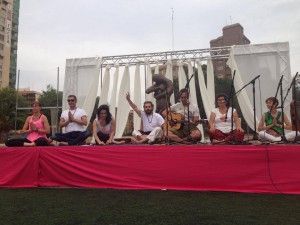 I missed out some dancing and talks that interested me, but unfortunately I have not yet the gift of ubiquity 🙂 Now I wish!

Besides all this, there was also a market where I could get a Tibetan bowl and flags to hang on the balcony on auspicious days and a classic sandalwood mala (garland) (Rincón del Tíbet) . I also bought some organic wine that leaves no headache because has no sulfites and ginger liqueur (Bodegas Cuevas).

And of course, I had to get myself some more books, everyone has some weakness 🙂 So I stopped at the booth of Auralia, where I was surprised to find so many books devoted to yoga, meditation and mindfulness. 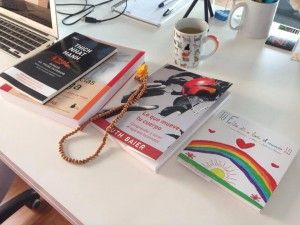 Books and other things bought at the flea market the Festival

In summary , a weekend full of yoga and therefore  VERY HAPPY .

I think it has been a resounding success and a great celebration of yoga.

What are your best memories? Do not forget to discuss them with us all.